This was a quick peak to bag by starting at the NJ botanical gardens. I didn’t find anything marking the true peak, so I just climbed up the tallest rock pile that I saw. 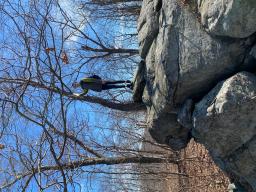 We parked at ringwood manor and took the yellow blazed Hasenclever Iron Trail. After passing under some power lines, we turned right following the recently rerouted section of the Hasenclever Iron Trail along a utility road (the old closed portion of the trail goes left at the intersection and goes past the Peter’s Mine superfund site). The new section of trail passes Hope Mine which is up a side trail to the left of the road. After passing the mine, we followed the yellow trail for another half mile and turned right onto an unmarked trail. We followed this trail until we lost it and bushwhacked our way up to the summit of Hasenclever Hill easily finding the large Boulder that marks the summit. We then went West following the park regulation signs and pale yellow blazing that mark the state line border and this lead us to the large rocky outcrop of the Black Rock Lookout point which did not disappoint! Even though it was Sunday, we saw a few hunters on the NJ side, so wear bright colors when hiking in hunting season especially since this hike involves bushwhacking and skirting the NY border where I think hunting is allowed every day of the week in season. I should have been wearing brighter clothes and had some orange on my dog as well, but thankfully we made it back the way we came without any issues. The unmarked trail portions of this hike would most likely be very overgrown in the summer. 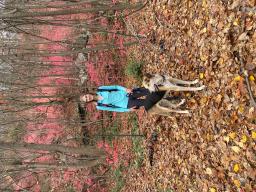 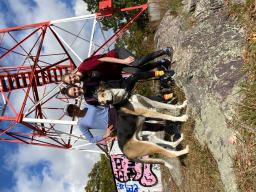 I started at the small parking area on Glenwild Ave where the Wyanokie Crest trail starts because the parking areas near the Otter Hole were packed. I took this trail followed by a woods road to the left to meet the Hewitt-Butler trail. Then I crossed the road, continued on this trail, did the figure 8, crossed the road again and returned the way I came. The hike was very nice, not overgrown and very quite except near the Otter Hole. I didn’t find the trail to the stone living room (I also didn’t really look for it) but I could hear through the trees that it was already occupied by a large group anyway. I will have to come back again and find it! 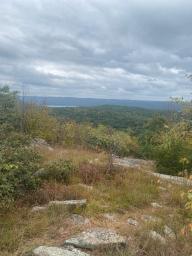 The parking near the Mt. Tammany loop was packed so my hiking partner and I parked at the Karamac parking area on Old Mine Road and took Farview and the AT to the Mt. Tammany loop doing it counter clockwise. We had the parking area to ourselves and the first part of the hike was very peaceful. The loop part was very crowded but it was still fun and the views were nice. We attempted to take the Mount Tammany fire road to the true summit but the trail was very overgrown and we were unable to leave the trail to find the summit but we got close! The parking area was full when we got back to our car and we explored some ruins on the Karamac trail before driving further up Old Mine road passing an old school house and many more ruins. I will definitely have to come back to do some more exploring and more peaks in the area! 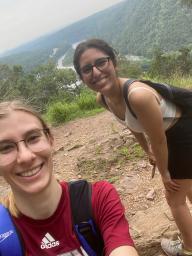 We parked in P7 and went up to the peak on the Terrace pond north trail. There were a ton of super tiny frogs hopping around in the lower shaded sections of the trail. We did a short and very overgrown bushwhack to the true summit which had an official metal “US Coast and Geodetic Survey” marker. (Pictured is me sitting with the marker) Then we hiked around Terrace Pond and down the way we came up. It was a very pretty hike, pond, and forest and the floating bridge and ladder were neat. We only found one tick as opposed to the 20 we found two weeks ago at Big Beech Mountain. Also thank you to Doc for the encouraging words after my Big Beech Mountain hike which was my first “bagged peak”! 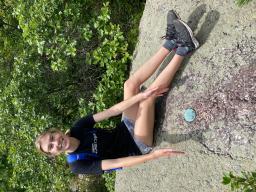 We parked at the Longpond Museum and only saw two other people on the Stirling Trail up to Big Beech mountain. The trail was well marked but muddy in spots and a bit overgrown. The viewpoint to the south was nice but we failed to find the other viewpoint.

Around the summit I climbed to the top of what appeared to be the tallest rock pile around but I did not know there was a small cairn somewhere very nearby marking the “true summit”. I kinda feel like I didn’t actually make it since I didn’t see this marking but all of this is just for fun anyway. I will be sure to check the previous summit comments before I go to the next mountain to see if there is some sort of marking to look for on the summit.

Then we proceeded to take a picture over the state line and go back the way we came. My hiking partner and I flicked about 20 ticks off of our legs and arms between the two of us and we were wearing bug spray. So far we have pulled 7 off of our poor dog and found a few that hitchhiked into the house on our gear. I’ve never encountered ticks like this on any other hike so I’d recommend taking every precaution, wearing bug spray, and going in the cooler months. It definitely gave me to creeps because I hate ticks but I still really enjoyed this hike.