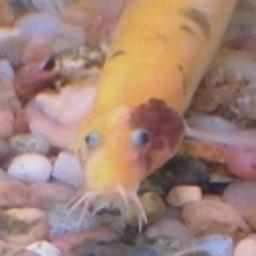 Got caught in a late season snow storm. Did Green to Yellow to Red to Green loop. The Yellow Wyanokie Crest Trail goes up-down-up-down-uip-down over & over & over especially after the summit, I felt like I climbed this mountain 5x. 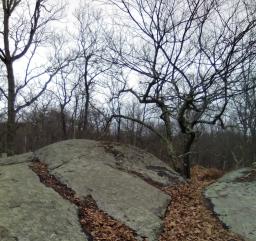 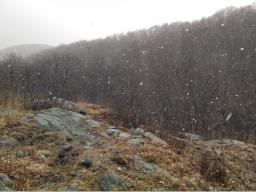 The Ditch Cardiac trail is clearly made for mountain bikes Lots of pointless (to hikers) switchback, cloverleaves. No View from Mountain except of route 80 through the trees/ 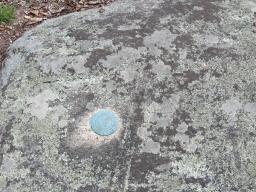 Continued on from Allamuchy Mountain, The JORBA Map of unmarked trails was accurate. No views from this summit either.

Started at p7 on Clinton Road, unlike the fall or summertime when I've been here, there were no cars and no people around. Kind of Creepy.

Started on the Coal Trail, passed through some type of boot camp with some real crazy vines. Continuing I passed through an area with lots of interesting stone walls (If the British come back I know where I am going).

The Coal Trail then passed through an area with lots deciduous bushes that even though it was close to the winter solstice all still were very green. Through the bushes I could see the Boulder Pine on top of the summit across a valley. It looked far and high, I was worried it would take an hour or so to get to the top, but thankfully it was only about 10-15 minutes away. Took Split Rock trail to top. No Views.

Lots of GNDN* herd paths off the Coal Trail, I took some for awhile and bushwhacked aimlessly around the stone walls looking for views but never found any.

* GNDN = Goes Nowhere, Does Nothing! Thank you Star Trek 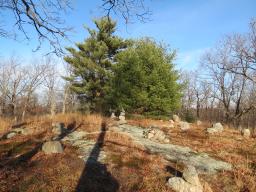 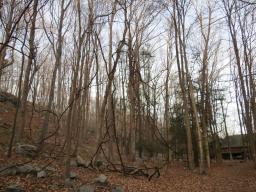 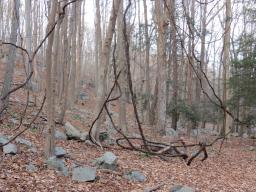 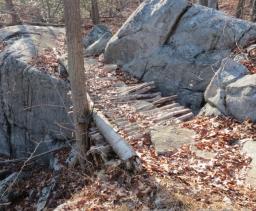 The only WTH moment is there are a couple of white trail marks on the Highlands trail just before you actually get to the Pine Swamp Trail. Ignore them, there's a big sign when you actually arrive at the start of that trail. 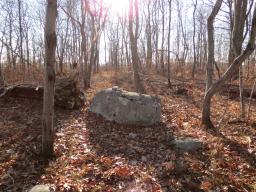 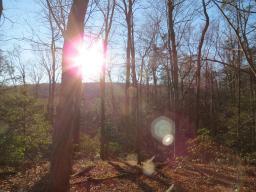 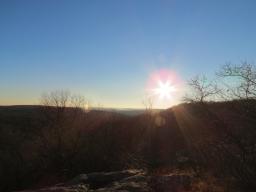 I parked at the Snowbowl, (which is a defunked ski center). There are signs there reading it is now county land open to the public and they are still trying to figure out what to do with the land. So happily there are no parking or trespassing issues.

I followed the obvious service road up to the radio tower. It's a steep sucker, with the #5 pitch being quite a doozy.

At 80 feet, the fire tower is quite tall. I've done many fire towers in the Adirondacks, none are this high, though unlike the rickety wooden steps of the Adirondack fire towers, this tower, including the steps are made of steal. The top cabin is closed but you can climb enough stairs to clear the tree line. Unfortunately, it was a cloudy day and the views weren't as good as they could be.

Going back down to mix it up I took the ski track next to the radio tower down. I was hoping it would be a short cut but it's much longer. It heads to towards the high school and is steep and probably overgrown in summer. Though I did see a box turtle crossing the path. 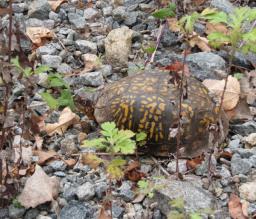 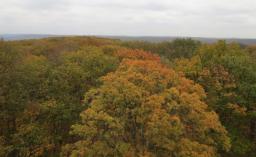 I initially tried to park at the lot the intersection of 511 and East Shore road, but the lot is overgrown it is clear that lot hasn't been maintained for quite a while now and the trailhead across the street was posted no trespassing. So I drove to the Ironworks Museum and started there. I wasn't sure if I could park there for hiking as there were signs hinting parking for the Ironworks site only, but the curator was outside and I asked him for permission and he said sure go right ahead.

There were some other people milling about the ironwork's ghost town but after that I didn't see a single person.

The 1st obstacle was the bridge over the Wanaque River being out. I was hoping it was re-build or after a summer of drought the river was fordable. The unfortunately the bridge is still out but luckily just a bit upstream the water was just low enough and rocks were just poking out enough to get across. This river is likely un-fordable at most other times.

Once on the other side, I continued to follow the Highlands Teal and Sterling Ridge blue dot trail to the summit. The trail is wide open and easy to follow, there's one long steep pitch which at the top is the 1st viewpoint to the south over the Monksville Reservoir. Continuing on, I passed the 2nd viewpoint which with the leaves still on the trees the view was limited.

The Big Beech section on this website mentions views to the east. Through the trees I could see there was a big drop off in that direction but I didn't see any herd paths leading to any views. So I continued on to the summit area and past it to the state line where I did the usual one foot in New Jersey / one foot in New York picture.

My initial plan was to go until the next viewpoints and maybe even make the Sterling Ridge Firetower, but after screwing around with parking and the bridge I decided to go back and use the time to find the true summit and the views to the east.

I went back and just off the trail I went to a rock outcropping that probably/hopefully was the true summit (there was cairn there, though it was rather small and sad).

Next I attempted to find the views to the east by bushwhacking off the trail to the ledges. The 1st two attempts failed as I hit the edge and there were still too many trees. The third time however was the charm as when I reached the edge, about 50 to 100 feet below was a ledge sticking out. A quick scramble down and there was a nice 180° degree from some unknown mountain (in New York?) with a radio tower in the North to the Monksville Reservoir to the south.

Also when I was on this ledge it started to snow!!! Just a couple flurries here & there and of course it wasn't sticking, but I was probably the 1st and only person in New Jersey to experience snow this season.

I climbed back up and bushwhacked back to the trail. I made a 4th attempt to find views to the east but found nothing. Then I decided to head back.

The trip back was a little slow through the steep part but mostly uneventful. That is until I was passing the last of the foothills before the bridge. On top I heard a coyote yipping about, but when I looked up, instead of a coyote there was this massive dire wolf, bear dog or hound of hell looking down at me. My heart sank into my chest; I went to grab my bear spray &knife but then I realized it was just a downed tree stump. I've seen my share of trees, tree stumps & rocks that looked like things before, but dam this one beats all. It look feline in the pics I took. The coyote continued to yip & yap about on the top of the hill (Maybe it was scared of this stump too) but I never did see it.

Surprisingly the river was easy to re-ford going back. I was worried the whole trip that I wouldn't be able to go back the same way I came without getting soaked. 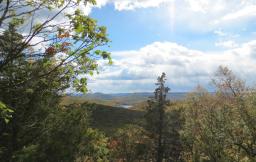 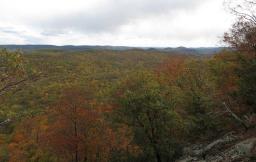 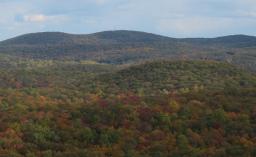 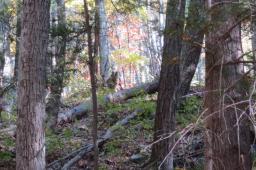 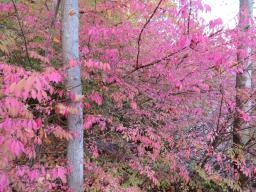 I initially wanted that unnamed peak south of Bear Swamp Rd but unfortunately Bear Swamp Rd seems to now be off limits to the public. So I drove over to the Ramapo Reservation and instead set out for Bear Swamp Lake.

My map was a bit dated (1998) and the color scheme of some of the trails has changed a bit in the passing years but I was able to figure it out and make good time. I was almost at Bear Swamp when I passed the pipeline up Drag Hill and looking up at it I had to climb it (I was unaware of the NJ1K at the time).

The pipe line is quite steep and eroded and takes a bit of time & effort to get up. Like the pipeline on Bearfort, photos make the ascent look tame and don't show how steep it really is. There's some cool Lillypad type trees on the way up.

Once on top there are some interesting rocks to climb on and herd paths here & there crossing the summit. With the time it took to go up & down Drag I never got to Bear Swamp Lake, which is OK as Bear Swamp Lake which may photograph nice is actually a very ugly lake that stinks of Sulfur. 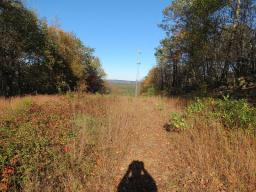 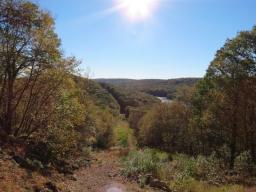 I've done this one dozens of times, almost always with a side trip to the Erskine Lookout.
I usually took Bear Swamp road to the Cannonball trail but that looks like it's off limits to the public now. It can be done by a hike from the Ramapo Reservation (Be warned, the parking lot often fills up).

One interesting time was in 2012. There was a very strange, very bright stationary light source or reflection far off in the distance. It was a bright sunny day, so to see it that far it must have been really bright. If it's a reflection I hope it doesn't cause a forest fire. 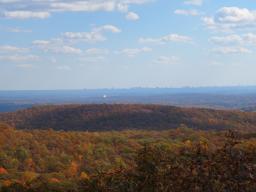 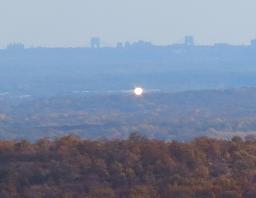