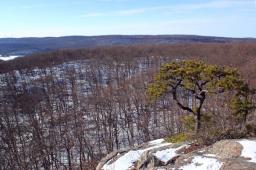 Not to be confused with Buck Mountain in the Wyanokies, this Buck Mountain rises high above the eastern shore of the Charlotteburg Reservoir in Kinnelon. Once slated to become a golf course, Buck Mountain was acquired by the state through the Green Acres program in 1997. The land apparently contains one of the few documented nesting sites for bald eagles in the Highlands region.

Buck Mountain is the kind of obscure, trailless, yet incredibly scenic mountain that makes peakbagging in New Jersey worth it. The summit has obscured, yet nearly 360 degree views of the surrounding mountains and there are multiple unobsctructed views of the Charlotteburg Reservoir and Smoke Rise from various lower locations on the slopes. Perhaps the best view is a long panorama of Copperas fromn the western side of Buck.

The summit indicated here is in fact not the highest point on Buck Mountain. Like most of the Northern Highlands, Buck Mountain consists of a series of bumps atop a high plateau. The actual summit (1140') is developed, with a water tank on its highest point. Nonetheless, the sub-summit of Buck Mountain chosen by the NJ1K Club is definitely worthy of high peak status. The sub-summit, a pitch pine studded crag, has views to the south, west and north.

So...Parked near R/R bridge and walked southeast following tracks quickly coming to a abandoned siding on the right backtracking a short distance until finding a stream on the left. Then turning south and following the stream up hill into the col to a woods road between the two peaks. Continuing on this “road” up hill and south till I could see the pines indicating the peak to the left. A steep and short scramble to the top and a nice view SW to North. Time - about one hour from the car walking slow enjoying the day !

Parked at the pull off at the intersection of Rt 23 and Charlottesburg Rd and walked the ~.3 miles to Winnebago Rd. A lot of sign postage but only on either side of the road and not on the gate. Walked down the road until I found a woods road with no sign posting. Took a faint trail that had some yellow flagging and got just below the summit. Did some rock scrambling and wading through thick brush and got to the summit and the views to the west. Followed the same route back to the car. 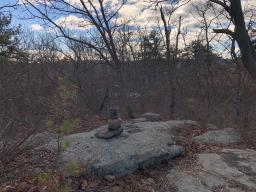 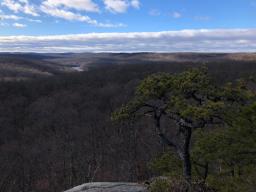 Parked at lot on Rt 23 and Echo Lake Rd. Walked road in over bridge and started bushwhacking up and to the left soon thereafter. Eventually ran into a trail that headed in right direction to summit. At a point below the summit it split and we went left and then started to bushwhack the last couple of tenths to the top.

Parked in the lot off Rte 23 at Charlottesburg Road. Walked to Old 23 to Timberbrook Road which becomes Winebago Road. I found the Jersey barriers referenced by Brian Lubbert and started bushwhacking from there. After descending the first hill, I found Brian's ATV trail. This trail passes in the col between Buck Mountain and the 980' rise just to the west of it. Seeing no other options, I bushwhacked to the top of Buck Mountain. Near the top someone had left a few old chairs and other litter around a fire ring. I wish people would pick up their trash :(

The summit is enmeshed in bushes and thorns. I'm glad I was bundled up for the cold (10 F today). The multiple layers of clothing provided relatively good protection. I'm also glad I didn't bring my doggies. I don't think they could have made it through the shrubbery.

On the return, I picked up the ATV trail and followed it south and west, all the way to Winebago Road. This trail joins the road just before the road dips and crosses a stream, about 4/10 mile south of the damn. After the trail passes to the west of Buck Mountain, it continues north, but I don't know where it ends. I thought it might stop at Green Hill Road in Smoke Rise, but it might veer to the northwest and rejoin Winebago Road. Just south of the damn, an ATV trail cuts off to the east, but I did not explore this. 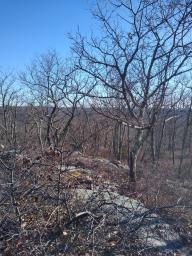 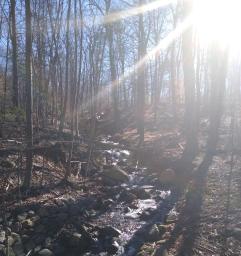 Freezing cold day - But it was my birthday so I dragged two of my daughters out with me! Uneventful hike....just cold 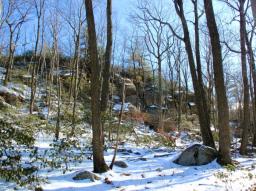 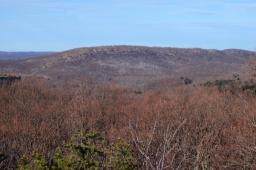 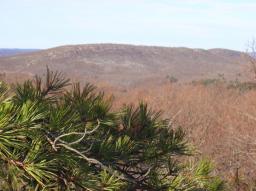 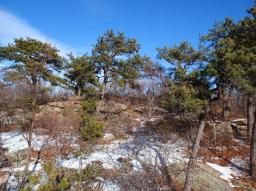 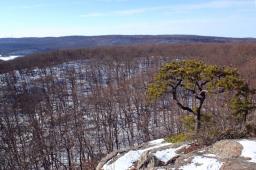 A viewpoint near the summit. —Eric Koppel 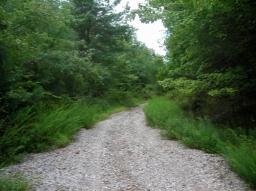 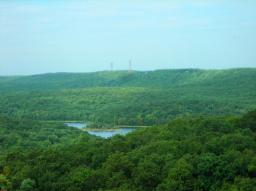 view of Charlottesburg Reservoir from near the summit —Mark Ladolcetta 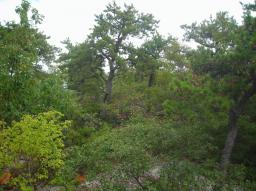